Donna Lynn Caskey is an innovative clawhammer “Banjo Gal,” as she is known, and so much more. A strong songwriter, her work simultaneously acknowledges life’s difficulties and offers a genuine message of hope. Her sound retains a timeless quality that hearkens back to traditional old-time mountain music and bluegrass while artfully exploring contemporary subject matter. Audiences appreciate Donna Lynn’s heartfelt, playful, and engaging stage presence and the opportunity to sing along during performances. For more information, please connect via her website www.donnalynncaskey.com and social media.

Donna Lynn Caskey is an innovative clawhammer “Banjo Gal,” as she is known, and so much more. A strong songwriter, her work simultaneously acknowledges life’s difficulties and offers a genuine message of hope. Her sound retains a timeless quality that hearkens back to traditional old-time mountain music and bluegrass while artfully exploring contemporary subject matter. Audiences appreciate Donna Lynn’s heartfelt, playful, and engaging stage presence and the opportunity to sing along during performances.

Donna Lynn grew up the youngest of ten children in a musical family on the Virginia coast. She attended college in the Blue Ridge, where she fell in love with and acquired her first banjo. She was awarded a scholarship to an intensive beginning banjo class at the John C. Campbell Folk School in North Carolina shortly before moving to Southern California by train in 2001. Within months, she started writing songs and playing shows.

If someone had told the teenage Donna Lynn Caskey that one day she would play banjo and perform original music in public, she would’ve thought they were joking. Born in the Tidewater region of the Virginia coast, the youngest of ten children in a family of music makers and music lovers, Donna Lynn came to believe early on she would have to make do in the “music lover" camp only.

Donna Lynn’s early experiences with formal music education left her feeling insecure. She felt dyslexic when it came to reading standard musical notation during piano lessons, so she doubted she could ever be a real musician. She got so nervous at recitals, her clammy hands would shake and slip on the keys, striking wrong notes. She loved to sing as a child, but reacted to teasing and criticism by becoming extremely self-conscious and quiet. Later, she chose to sing at least forty voices deep in a choir where it felt safer.

Donna Lynn continued in the role of music fan and appreciator by devouring eclectic public radio broadcasts, checking out stacks of recordings from the library, going to concerts, compulsively making mix tapes comprised of beloved songs and new musical finds and sharing them with friends. She eventually realized that some of her favorite songs and voices were often rough around more than just the edges, yet were tremendously affecting, nonetheless. She was also encouraged by stories of musicians who couldn't read a note, but who could touch hearts with their gifts just the same. She began to think maybe she could make music, after all. It didn't have to be pretty and perfect. Simple, homemade music could be powerful music.

Music also started to feel more within reach while Donna Lynn studied art at Hollins University in the Blue Ridge Mountains. She began assembling her own a cappella arrangements of traditional folk songs in the privacy of her dorm room. She attended a concert by Mike Seeger, who presented folk music as something accessible that truly belonged to everyone.

College years were the time when Donna Lynn discovered a deep love of the banjo, as well. A regular attendee of the local Roanoke Fiddle & Banjo Club, she found herself weeping with joy more than once during banjo solos. She even remembers dreaming there was a glowing banjo in place of the moon! On Saturday mornings, she would go listen to old-time and bluegrass jams at an acoustic music store inside Happy's Flea Market. Before long, she had her eye a lovely banjo hanging on the wall. As her college days waned and she was unsure what was next, she bought herself that banjo for graduation.

Donna Lynn proceeded to spend the next two years traveling, moving from job to job and place to place. The banjo gathered dust at her parents' house, and she felt guilty letting that beautiful instrument go unplayed. She took it to a local music shop for consignment. The woman behind the counter convinced her not to, however, and Donna Lynn ended up paying to have the banjo set up and restrung instead.

Soon after, a friend was heading to Brasstown, North Carolina for an internship at the John C. Campbell Folk School. Donna Lynn looked at the course catalog, which listed a class called “Beginning Clawhammer Banjo by Ear” taught by Diane B. Jones. The catalog also indicated scholarships were available. The week before class was scheduled to start that summer of 2001, Donna Lynn was notified she was awarded a scholarship. Three days in to that week-long, intensive class, the basics of playing clicked.

The following week, Donna Lynn and her banjo moved to California by train. She was afraid she’d left the music community behind her in Virginia, but within days of arriving, she met a fiddler at the farmers’ market who invited her to a weekly old-time jam. Through the jam, she was connected to local music festivals, banjo workshops, lessons with master old-time musician Brad Leftwich while he lived in the area, and to her first paying gigs. She remains friends with members of that group to this day.

For more information, please go to www.donnalynncaskey.com, where you can sign up for e-mail updates and connect via social media. Donna Lynn is grateful for everyone who has helped her become the “Banjo Gal,” as she is known, and encouraged her to be a musician. 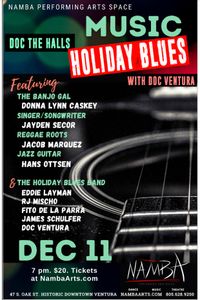 Doc the Halls – Holiday Blues $20.00 Saturday, December 11 at 7pm I'll share a few seasonal songs at NAMBA's fourth annual year end variety show hosted by Doc Ventura. The theme is Holiday Blues, but the show will feature many genres of music along with talent, songs, guests, celebration and surprises. Be here the same weekend as Ventura’s Wine Walk. Come downtown and make a full day of it! Venue COVID protocol: As we return to theaters and live events, the well-being of our patrons, artists, staff members and community is paramount. An inherent risk of exposure to COVID-19 exists in any public space where people are present. Protocols for attending in-person events are developed in conjunction with evolving state, and local health guidelines. We appreciate your flexibility and understanding as these change frequently as Covid conditions evolve. Proof of full vaccination or, a negative COVID-19 PCR test taken within 72 hours of the shows you are attending, is required. “Full vaccination” means a final COVID-19 vaccine dose was administered at least 14 days prior to the event. Approved vaccine verification documentation will be required for entry, along with official photo ID. A photo result saved to your phone is sufficient. Masks are required in indoor spaces at all times. Patrons must provide their own face coverings that fully cover both nose and mouth. Bandanas, gaiters and masks with external valves are not permitted.